DOUBLE HURRICANES LEAD TO TRIPLE THE SUPPORT FOR SISTERS IN NEED

When natural disaster struck in the form of two hurricanes, the sisters of the Delta Eta—McNeese State were reminded of the power of sisterhood when three of their alumnae sisters received emergency funding from the Alpha Delta Pi Foundation. In August 2020, Hurricane Laura hit land in Louisiana and caused catastrophic damage, but the people in Louisiana and surrounding states were once again impacted by disaster a few weeks later when Hurricane Delta made landfall. Three Delta Eta sisters received Clasped Hands Fund grants for alumnae facing financial distress, to aid in repairs after the hurricanes. Here, they share the impact the grant made on their recovery process and how our Alpha Delta Pi sisterhood has continued supporting them past their collegiate years.

Marsha Williams Mouser joined the Delta Eta chapter in the Spring 2004 through Continuous Open Recruitment and maintained involvement in the chapter throughout her years in college, holding multiple positions, including Chapter President. Marsha shared that her favorite part of her experience was the sisterhood and getting to know the women in her chapter. As an alumna, Marsha has served as a Collegiate Province Director, Chapter Advisor, and is a part of the Alumnae Association in Lake Charles. 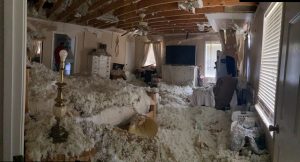 Although Marsha was badly affected by the hurricane and in need of aid, she questioned applying for the grant at first, but ultimately decided to apply. When Marsha was notified that she had received the grant, she said that she felt excited, relieved, and thankful. After struggling with insurance and lack of supplies and contractors, Marsha explained that the grant enabled her to move forward with rebuilding without worrying about extra funds. During the rebuilding and healing process, Marsha said that she and her family are taking things day by day and finding the best outcomes in daunting situations, and that the grant has helped tremendously in relieving some of the stress associated with the process.

While they are still not living in their house, Marsha and her family are hoping to be back home within the next month. In wise words of advice to her fellow sisters, Marsha stated that it does not hurt to apply for the grant, which has funds available and is supported by our sisterhood. Receiving a Clasped Hands Fund grant reminded Marsha that she is still loved by her sisterhood.

Gina Reed initiated at McNeese State University in 1984 as a third semester student and jumped headfirst into involvement within ADPi. As a collegian, she served in many roles, including Guard, Corresponding Secretary, and Chapter President, as well as being active in other campus organizations such as the cheer team. As an alumna, Gina has stayed connected with Greek life as a recruitment counselor, a member of her chapter’s House Corporation, and an Alumnae Association member.

Gina’s home and property were devastated by the double hurricane in 2020 when fallen trees caused extensive damage. She applied for and received a Clasped Hands Fund grant, which allowed Gina to begin the process of removal and repairs to her home’s roof. The hurricanes hit during a time when Gina was experiencing outside stressors on her finances, and she did not remember the grant until a sister posted about it on Facebook.

Gina said she felt overwhelmed when she found out she had received a Clasped Hands Fund grant, noting that it was hard to ask for help at first, but it was incredibly impactful when she did. Along with the grant, members of the community also helped her family while they were unable to fully care for themselves. Gina credits a lot of the outside help they received to networking she did both as a collegian and as a professional. From contractors to tree removal to insurance, someone with a Greek Life experience was always there to help Gina in her time of need.

From her experience, Gina hopes that collegians learn to network and get to know as many people as possible, including those outside of Alpha Delta Pi. Gina shared that networking is a large part of how she got to where she is and has opened many doors for both her and her children. She also hopes that collegians make the best of their college years because they were some of the best of her own life. To alumnae, Gina hopes they learn to get involved with their home or local chapters, as well as with alumnae associations, because of how rewarding it is to give back to an organization that has given so much to its members.

Andrea Delpapa is another sister from Delta Eta who was initiated in 1989 and served as Standards Chair and two terms as President during her time as a collegian. Andrea spoke very highly of her time in the chapter, saying that the friendships really do last forever, and the sisterhood bond grows stronger even beyond the four years of college. She pointed out that the bonds of sisterhood and friendship build and grow into a network of support that lasts a lifetime. As an alumna, Andrea has stayed connected to Alpha Delta Pi through her chapter’s House Corporation and through her daughter, also a member of Delta Eta chapter. 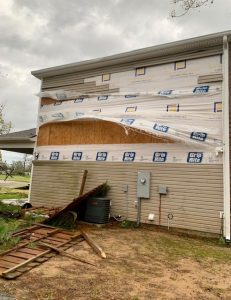 Andrea is no stranger to disaster, as evidenced by a house fire and the two hurricanes that affected her home within years of each other, but she said that during each circumstance, her sisters were there to support her and give her the aid she needed to continue. Similar to Gina, Andrea was unaware of the Clasped Hands Fund until information was shared on Facebook by a friend and sister. Andrea said that since she was going through hard times, it would be worth it to apply and see what would happen. Upon receiving the grant, Andrea said she simply cried; after going through so much, it was such a relief to her to have that help and take some of the financial stress off of her mind. Andrea said the grant improved her overall mental health and allowed her to sleep again without worrying about the problems plaguing her life. With the grant, Andrea was able to pay her bills and begin repairs on her home while going back to work and supporting her family.

Although there is more work to be done, Andrea says she is in a more peaceful state of mind thanks to the grant, and she is slowly getting back to normal. The grant has given her the freedom to work on her mental health and states that in order to be there for everyone else, you have to first be there for yourself. From her story, Andrea hopes that sisters will enjoy their time, make mistakes, learn from them, and then give back. Andrea would also like to see the lines of communication remain open between collegians and alumnae, and that sisters continue with the tradition of giving back both their time and knowledge… as well as gifts to the Clasped Hands Fund.

While the circumstances which brought the community surrounding the Delta Eta Chapter together were devastating, it serves as a reminder of the strength of sisterhood. These three grant recipients hope that by sharing their stories more sisters will be aware of the Clasped Hands Fund and how important it is to give back. Marsha, Gina, and Andrea all chose to give back to their sisterhood and were touched by the generosity of their fellow sisters who also gave back, and they could not be more thankful for the support of their fellow sisters.

SUPPORTING THE CLASPED HANDS FUND AND SISTERS IN NEED 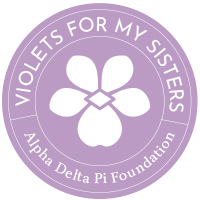 To support sisters like Marsha, Gina, and Andrea, please consider making a gift through our annual Violets for My Sisters campaign. Your gift of $5 per Violet tribute supports the Alpha Delta Pi Foundation’s Clasped Hands Fund, providing emergency grans for alumnae in financial distress. Your “Virtual Violets” will be delivered to your honoree via email and provide a reminder that We Live For Each Other. Make your gift online by June 30, 2021 at www.violetsformysisters.org. Our Virtual Violets are connected to our member search feature in Pride Online, so you’ll be prompted to login. Non-tribute gifts can be made to the Clasped Hands Fund throughout the year at https://donate.alphadeltapi.org/chf. Gifts to the Alpha Delta Pi Foundation are tax-deductible as allowed by law.

To learn more or apply for a Clasped Hands Fund grant, visit https://www.alphadeltapi.org/foundation/emergencygrants.