You may make a one-time or recurring gift online using a Visa, MasterCard, American Express, Discover Card, or ACH anytime on the Foundation Donation page.

You may send your check made payable to the “Alpha Delta Pi Foundation” to:

Many companies offer a matching gift program for their employees, helping you double – or even triple – the impact of your gift! Gifts from retirees and spouses may also qualify for a match.

If you do not find your employer listed, please check with your company’s HR department to see if your company offers a matching gift program.

Gifts of appreciated stock, real estate, or other gifts of personal property and assets of value are accepted by the Alpha Delta Pi Foundation. Please contact us at (404) 378-3164 or foundation@alphadeltapi.com to make transfer arrangements.

Over the years, many members and friends have named the Foundation as the recipient of a planned gift, such as an estate gift, life insurance policy, charitable trust, or charitable gift annuity. Planned gifts, most of which are tax-deductible can be arranged through legal counsel or a personal financial planner. We are happy to discuss planned giving options and can provide you with sample language for a will or other planned giving vehicle. If you have included the Foundation in your estate plans, we would love know so we can recognize you as a member of the Summit Society. Please contact us at (404) 378-3164 or foundation@alphadeltapi.com to discuss your planned giving options and visit our planned giving site at www.adpifoundationlegacy.org to learn more.

Individuals aged 70 1/2 or older can make charitable gifts of up to $100,000 from a traditional or Roth IRA directly to the Alpha Delta Pi Foundation without having to pay income taxes on the distribution. With the Protecting Americans from Tax Hikes (PATH) Act, passed in 2015, this giving opportunity was made a permanent addition to the tax code. For your convenience, we have a sample request letter for making a qualified charitable distribution from an IRA. As always, the Foundation encourages you to consult with your legal and/or financial advisor before making any decisions, especially as it relates to state and federal income taxes.

The Collegiate Emerging Leader Award is presented annually to members who demonstrate a commitment to leadership in Alpha Delta Pi, on her campus, and in her community. This award honors the spirit of our young, innovative founders who had the foresight and propensity to create our beloved sorority.

The award is presented to sisters who are a first- or second-year member and have shown great leadership ability or potential. They must have earned a minimum 3.14 cumulative college GPA and have a recommendation from a chapter officer, advisor, or campus professional demonstrating how the member lives our Creed and has impacted her chapter. 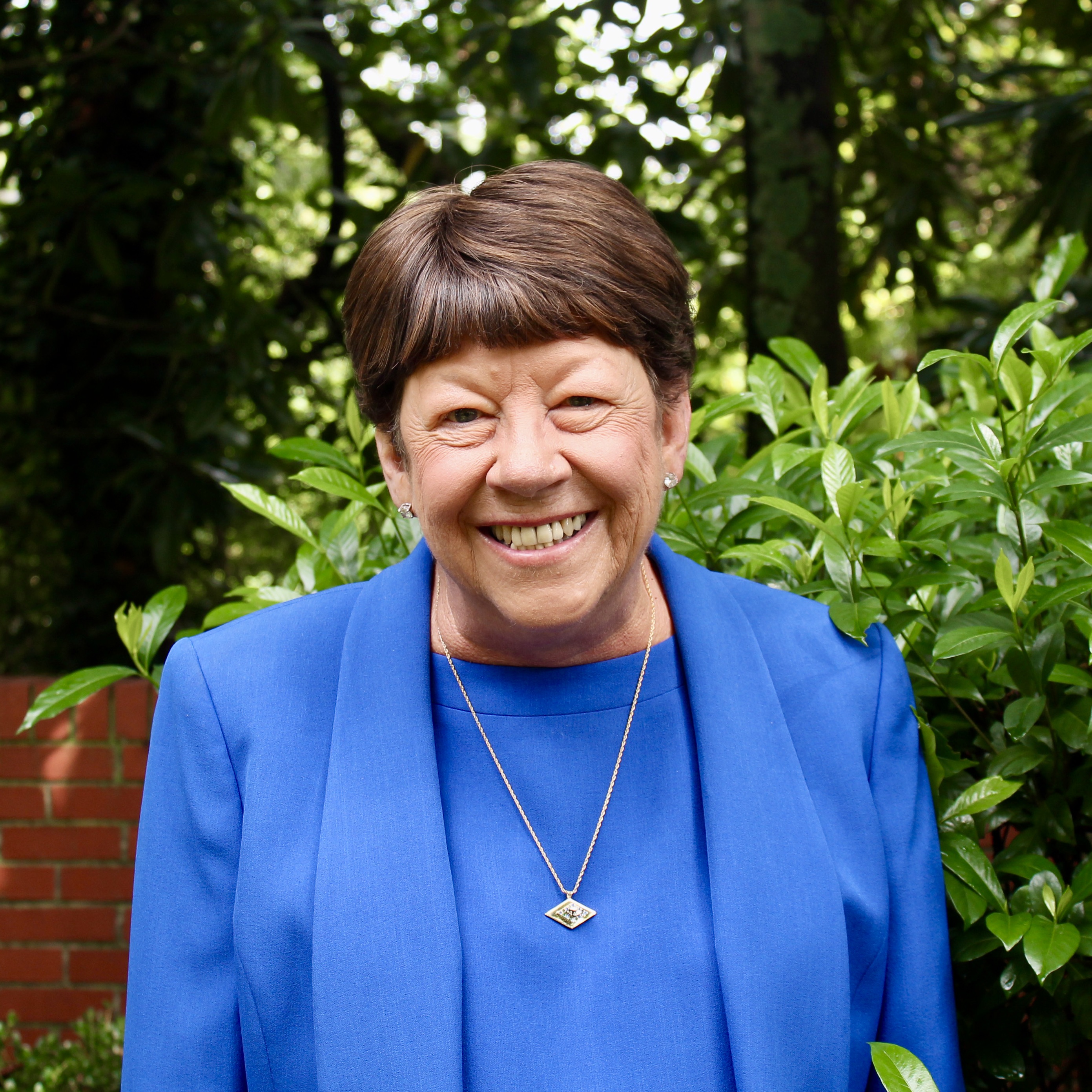 Linda’s Alpha Delta Pi legacy is unparalleled. In 2018 she retired from the position of Executive Director after 15 years in that capacity. She served during a time of great growth for the sorority and implemented many new projects that propelled Alpha Delta Pi into the 21st century, including our highly successful internship program. In 2019, the Executive Director’s office was officially named in her honor at a special event celebrating her accomplishments. Her successor, Amanda Sloan, Alpha Beta—Iowa, noted, “Linda was a mentor to many Alpha Delta Pi staff and Greek friends in her role as Executive Director. She took time to learn the business and advocate for Greek women and our organizations. Her leadership and influence run deep and our industry is indebted to her.”

Prior to her role on staff, Linda served in numerous capacities, including International Secretary, Adelphean Editor, Traveling Chapter Secretary, and several committee positions. Past Grand President Virginia Rosenberg Stafford, Alpha Beta—Iowa, remarked upon learning of Linda’s passing, “She was an Alpha Delta Pi who loved and understood the sorority and knew how to write about it and express it, too.” Indeed, Linda’s words will live on forever through her many Adelphean articles and our two beautiful history books, Sisters and More Sisters.

Linda’s impact on the fraternity and sorority world was not limited to Alpha Delta Pi. She served as President of the Fraternity Executives Association and in 2012 received the Evin C. Varner, Jr. Fraternal Communications Award presented by the Fraternity Communications Association. At Alpha Delta Pi’s 2019 Convention in Las Vegas, Linda received the Joan Perry Boatright Alumnae Loyalty Award for her years of dedicated service. “Linda’s impact is deep and wide, not only within Alpha Delta Pi but also in our Greek community,” noted International President Emily Erkel, Zeta Chi—Baylor. “Most importantly, Linda impacted the lives of individual sisters and friends with her passion for the Greek experience, love of ADPi history, faith in God, and belief in the potential of others. I personally cherished Linda’s ability to both learn from and teach others through her many roles. She made a difference in my life as a young consultant and again as President.”

Linda's service and impact was deep and wide in the Greek Community. Her life will be celebrated at the following gatherings to allow people from many areas of her life to participate.

Fraternal Executive Association (FEA) will recognize Linda during their annual Executive meeting on May 28, 2020, in Norfolk, Virginia.

Linda's family will celebrate her life with a memorial service at Russell Baptist Church, about 25 miles from Altus, Oklahoma, on the morning of Saturday, May 23, 2020. All are invited to be part of this service. The church is about 25 miles from Altus, which is about 160 miles from the closest airport in Oklahoma City. Hotel accommodations are available in Altus at the Holiday Inn Express or at the Hampton Inn; they are also available in Oklahoma City at a number of hotels. If you are planning to attend, please let Amanda Sloan know so we can share logistical plans as they are finalized and keep the family current on expected ADPi guests.

The National Panhellenic Conference (NPC) will recognize Linda during their annual educational conference and meeting on October 29, 2020, in Lexington, Kentucky.

Alpha Delta Pi will recognize Linda during our biennial Convention on June 24, 2021, in Orlando, Florida. Linda's impact will be celebrated during our memorial service.

Donations in Linda's memory can be made to the Alpha Delta Pi Foundation, 1386 Ponce de Leon Ave NE, Atlanta GA 30306 for the Alpha Omicron Housing Fund to construct a new chapter house at Linda's home chapter at Oklahoma State University.

Read Linda's obituary. A full obituary will also be shared in the spring 2020 Adelphean. Read more about Linda’s service to Alpha Delta Pi in the fall 2018 Adelphean article celebrating her retirement.

Through the interview process, nine LCs were selected. Ginny-Beth Joiner, Director of Collegiate Services, said this about the candidates, “We are so excited for the nine women who will be joining our team for next year at the beginning of their professional journey.  The leadership experience and strengths that these new LCs possess will benefit our chapters and organization greatly. They were selected from a highly competitive group of applicants that were all phenomenal representatives of Alpha Delta Pi’s highest ideals.”

Alpha Kappa - University of Tennessee, Knoxville will be holding their 100 year celebration on the weekend of April 17th - 19th 2020.

We're excited to celebrate our chapter's 40 years on the Baylor campus!